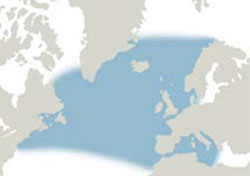 In the North Atlantic: Approximately 800,000 animals at least

The long-finned pilot whale is mostly black or dark-brown, with a grey spot behind the dorsal fin. There is a white or light-grey stripe along the belly running right up to the head where it splits to form an anchor-like pattern. In some individuals, white or greyish shadows may be seen pointing backwards from the eyes. Young animals tend to exhibit a lighter colouring. The dorsal fin (particularly on a bull) is high, back-swept and set well forward on the body; its location distinguishes this species from all other whales in the North Atlantic. Another characteristic of long-finned pilot whales are significantly elongated back-swept flippers which may constitute up to 30% of the animal’s total length. The spout is about 1 m high and only visible under ideal conditions. Pilot whales usually dive for only few minutes at a time. When they blow, the high melon may be seen and the location of the dorsal fin to the front of the back. Pilot whales usually travel in groups and there may well be hundreds of them together in one school. They eat during the night and rest in the daytime when they are often seen lying close together, motionless, as if they were asleep. Pilot whales, like some other whale species, sometimes ”tread water”, or spyhop, as if checking out their surroundings. They may also indulge in slapping or lobtailing, either in a horizontal or vertical position – what these antics are supposed to mean is unknown. 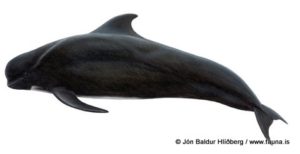 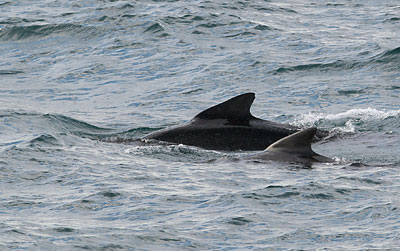