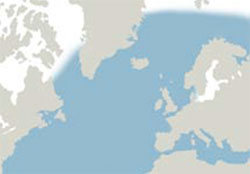 In the North Atlantic: Approximately 20,000 animals

Sperm whales are characterised by a dark grey or brownish-black back and somewhat lighter sides and belly. In adults, the inside of the mouth is white and there is often a light-coloured or white patch near the genital slit. The body, to the rear of the head, is rough. Sperm whales have huge heads, especially adult males. The blowhole is near the top of the head, on the left hand side. The flippers are chunky and paddle-shaped. The lower part of the caudal peduncle has a robust ridge. The flukes are extremely large, somewhat triangular in shape and not as broad, proportionally, as on other large whales. The dorsal fin is an irregular thick protuberance to the rear of the mid-back. On top of the caudal peduncle is an irregular sequence of knobs of varying sizes. The bulls are significantly larger and of rougher build than the females. Sperm whales produce a distinctive spout, slanting forward and to the left. Normally the column is not particularly tall, although it may reach a height of several metres. Sperm whales are usually slow swimmers, but may indulge in energetic spurts. They are generally considered to be the greatest divers among the whale family. Between spells of deep sea diving, they ingest oxygen by blowing for up to 15 minutes. Before descending back into the deep, they lift their flukes well out of the water. Young animals enjoy breaching. Sperm whales travel in small schools. 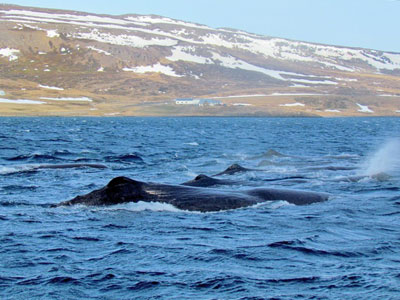